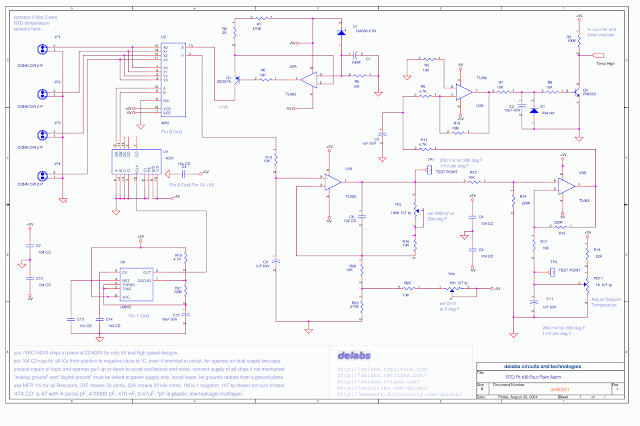 I’m looking at an idea for a circuit design; The idea is to sense a temp of 130 degrees and then light an LED and start a timer delay. The delay would be 3 min, after the delay if the temp is still above 130 sound alarm.

With the LED I would like to drive a counter display to show how many times the temp was sensed. I would like powered by 120vac and a 9 volt battery backup for counter circuit.

If you can assist please let me know.

The circuit you require is possible, what is the time frame within which you require it ? You also need to tell the resolution you require is it 130 or 130.0 and counter upto 9999 ? what are the controls you want and the outputs required if any.

I can design above with simple analog-digital based circuits, microcontroller based designs will
take much more time but can be upgraded easily.

a reset for counter and I would like the temp sensor to have 4 sensors so I could surrond a pipe and any sensor would trigger circuit. The unit would be mounted about 6-8 inches away from sensors. Thinks a probe type sensor so it can protrude from a plastic tube that wil be sheped to meet pipe or vent design.

I might not need AC if the circuit can be powered from 9 VDC battery like a Smoke detector.