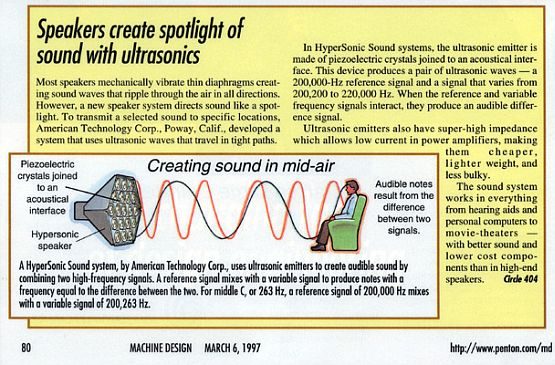 This looks like something from the “Believe it or not”, I cannot understand it well, but logging it here. – delabs

What Are Some Woody Norris Successes?

Hypersonic Sound: Sound From Thin Air – Mix two signals in a nonlinear medium and you’ll end up with four – two at the original frequencies….

If the carrier frequency of the transducer were 200 kHz, an upward swing of 20 kHz – or just 10 percent – would cover the entire audio range. In theory, this should result in a response that is virtually flat across the audio range – something that no speaker”

“With conventional speakers, the sound is projected by moving the air containing the sound waves against a cone moving back and forth inside the box. But with Woody’s speakers, it’s a process that happens in the air itself. Sound is beamed at the wall and it comes off the wall where it is imbedded on top of the ultrasound. A process that happens in the air unimbeds it, or demodulates the two, so in essence, the room in which you are using the speakers is, itself, the speaker box. “

Thanks for your reply for hypersonic speakers , but sir i am unable to have any positive feed backs as far as its making is concerned, i have contacted hypersonic industries also in this context, but they want me to buy a unit. i will see what i can do. thank you once again for your help.

I dont know if this idea is good for college projects, but you can buy a Hypersonic Speaker and demonstrate an application in automation.