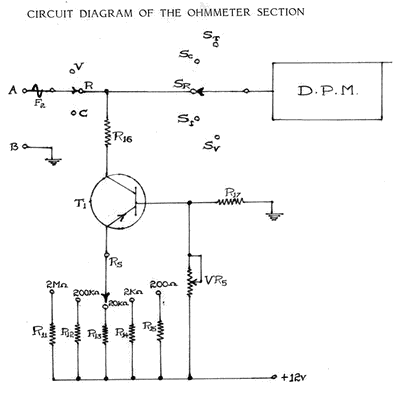 Measurement of resistor values in circuit configurations are required to be made often, as these might have changed in value due to various tolerance ranges, and hence could be the cause of faults. Likewise the resistance of components used in a circuit, may need to be known. In such cases the measurement of resistance is a must.

According to the range of resistance being measured the switch Rs also selects the decimal point of the displays in the DPM. A resistor R limits the current to the decimal point of the LED displays. Transistor T I is biased by resistor R17 and variable present VR5. As this preset sets the value of current in transistor T1, it has to be adjusted for calibrating the resistance range. Once the calibration is over, the resistance value is directly read on the DPM.

(This is scanned-ocr from my earlier file, some mistakes corrected – delabs)