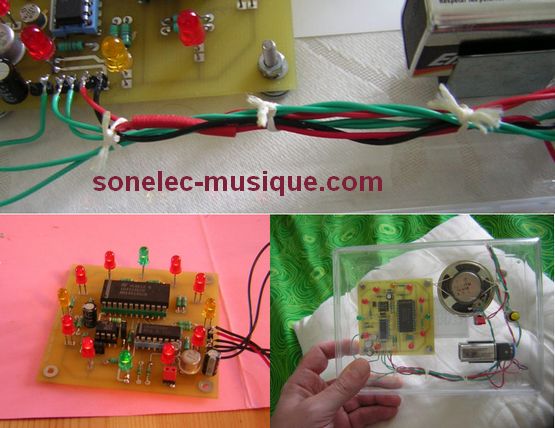 The following was submitted on July 11th, 2007. Message: I want to combine Ne555 with 74154 IC.The indication of the outputs must be shown with LED’s but up to so far it need 15 outputs ,is it possible the way i did? if not i will need your assistance

LED running lights are used to decorate Christmas Trees, Festival Surroundings and even  Buildings. A Clock and a counter are basically required. Many LEDs can be used in parallel with driver transistors. Upto 15 count is is good enough. Many colors can be used and with a PWM or VCO you can make it Audio or Music effects lights like strobe lights.

Multi-Colored LEDs and drivers and even PIC microelectronics with Visual Effects in the form of ROM tables can make Alphabets and Numbers appear in LED arrays. Some have made Mini Ocillosocpes and Toy Spectrum Analyzers too in LED DOT Matrix Arrays.
LED Sequencer Circuit

The above circuit is another variation of a basic LED sequencer circuit. Note again the use of the 555 as a clock. The 555 is likely one of the most versatile chips ever invented. The output of the 555 is coupled to a 4017 Decade Counter Divider another very widely used chip

555 and CD4017 Running Lights
The 555 clocks 4017 counter and it counts and Ten LEDs indicate the counts. This can be used as a Sequential timer or for generating staircase waveform.

LED Blitzer is a LED Blinker

Electrical Symbols that you should Know